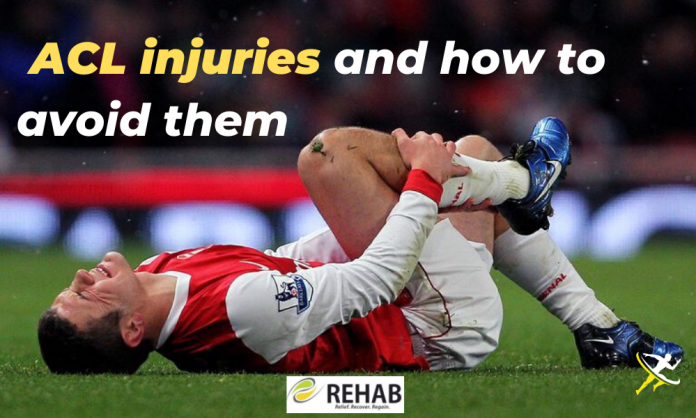 ACL injuries- We have often heard about them, then may it be in football, basketball, American football, or downhill skiing. We all identify ACL injury as the worst form of sports injury. ‘Worst’ because it has the power to rule athletes out for months, not weeks.

Remember how Zlatan Ibrahimovich recovered from an ACL injury in just 7 months? ‘Lions don’t recover like humans!’ was how the footballer funnily described his recovery. However mind-boggling as the comeback may be, it proves that even the most incredibly fit footballers like Ibrahimovic are also susceptible to ACL injuries.

They said it was over. I said NO pic.twitter.com/6RqSB4zyHL

His neat comeback game against Bristol City provides evidence of how well one can recover quickly from such a dreadful injury. Let’s get to know more about the ACL injury and the secrets about how to avoid it.

Anterior cruciate ligament in the knee joint is one of the two ligaments inside the middle section of the joint that forms an X. The primary function of this ligament is to prevent the leg from moving excessively forward and excessive rotations at the knee joint.

The main causes of ACL injury are:

Other than the above-stated causes, valgus (outward movement of the leg with respect to the thigh), muscular imbalance (weakness and tightness) can also increase the chance of ACL injury.

History of ACL injury in the past also increases the possibility of a re-injury if the rehabilitation was not adequate. If another injury accompanies the ACL injury to any other structure of the knee joint like Collateral ligaments or meniscus, it is possible to delay the recovery.

Symptoms of an ACL injury

If a grade 3 injury to the ACL occurs during play or during a fall, a distinct popping sound is audible. This may be accompanied by an inability to weight bear on the injured knee due to instability often described as ‘the knee was giving way’.

As grade 3 tears involve complete disruption of the integrity of the ligament, people often feel a sudden sharp pain initially. It occurs most commonly with a popping sound.

Instability, swelling and minimal pain (maybe due to structures injured other than the ACL) form the classic symptoms of a grade 3 ACL injury. Grade 2 and grade 1 injuries often involve a lot of pain and swelling with minimal instability.

Surgical interventions often depend upon the physical demands of the patient’s life. It is possible to manage grade 1 and grade 2 tears. Apt rehabilitation and progressive exercises are crucial in prevention becoming grade 3 tears.

Surgical procedures, whether reconstruction or repair, are advised to young adults or people involved in an active lifestyle. It is often the treatment of choice where the patient wishes to continue with the sport or an active fitness regime after the injury as well.

Whether one undergoes surgery or no, REHABILITATION becomes a critical part of the recovery process.

Rehabilitation after an ACL injury starts immediately post-injury. The first aim is to protect the ligament and reduce the risk of further damage. Protection and optimal loading are critical.

A wide range of bracing products is now available in the market which can support the joint as per requirement. Blocking the terminal knee straightening and sudden twisting at the knee is key to this phase.

A physiotherapist can help to reduce the swelling, pain and maintain the range of motion at the knee to avoid stiffness. The physiotherapist also provides gait training assistance.

Maintaining or increasing muscle strength of hip and other limb muscles is also a goal in the early stage of injury using non-weight-bearing exercises.

Gradually, the brace is removed, and muscle strengthening and balance training are started to get an optimal hamstring: quadriceps ratio. Introduction of training for functional activities under the supervision and before proceeding with the next step as per the goal of the patient.

A systematic review conducted at the School of Physiotherapy, The University of Sydney, Australia, found that prognosis in ACL deficient knees is good with respect to knee function and performance.

But the activity levels drop to 21% after the injury. A person may not be able to reach their pre-injury activity status if the injury is managed conservatively. Thus, people who have a very active lifestyle (like athletes), or young individuals opt for the ACL reconstruction or repair surgery, as it is elective surgery.

It is a well-established fact that any muscle that undergoes a surgical procedure, losses one clinical grade of strength. This makes pre-operative interventions crucial for better and faster recovery post-surgery. Exercises mainly focus on maintaining the available strength and involve specific immediate post-operative activities.

A large percentage of this population (72%) was also seen to resume the pre-injury level of sports activities within two years.

This phase usually spans the time from right after the surgery to about 6 weeks post-operatively. Main aims of this phase are to reduce pain, swelling, regain an optimal range of motion and strengthening.

Studies suggest that dealing with suture site pain is very much possible by using Transcutaneous Electrical Nerve Stimulations (TENS) as it works on the pain gate mechanism and causes the release of endogenous endorphins.

In some instances, using a Controlled Passive Movement (CPM) machine is advocated if the patient is unable to flex the knee beyond a certain angle. Regaining this range is imperative to ensure the success of the surgery.

Strengthening exercises are graduated from isometrics within the brace to active strengthening regimes in open kinematic chain. Exercises targeted to increase joint position sense, and balance are also started in the early phase.

This phase takes between 6-12 weeks of the rehabilitation process. The foundations of this phase includes strengthening the muscles surrounding the knee joint, as well as obtaining an optimal Quadriceps: Hamstrings ratio form.

This is the final phase of the rehabilitation process for individuals who do not lead an active sports lifestyle. The aim of the exercises in this phase is more towards refining motor control, strength, balance and proprioception. The most important goal of this phase is to make the operated limb equivalent to the healthy limb.

This phase of rehabilitation is generally for those athletes or individuals who want to get back to a highly active lifestyle. It mainly involves simulation of a part or whole movement essential for the particular sport.

Knowing the sport demand and pre-injury level of the athlete is essential when designing the exercise program. Sport-specific goal-oriented training focusing on refining neuromuscular control is the highlight of this phase.

Initially, training is supervised and performed under a controlled environment and then transferred to the field. Performance enhancement and re-injury prevention strategies are also a part of the return to sport phase with its inclusion in future training also necessary.

How to prevent an ACL injury?

It is possible to prevent an ACL injury by correcting muscular imbalance (strength and flexibility of muscles) in the lower body. Refinement of dynamic postures occurring during sports matches can eliminate faulty movement patterns. This could result in a reduction in injury risk.

For example, correction in the faulty landing after a jump during sports like badminton, basketball, volleyball, etc., can reduce the chance of an ACL injury.

Get the best advice about ACL recovery here!

ACL injuries have the potential of hampering your career, forever. And you won’t take chances with your career, would you? The physiotherapists at REHAB STATION are experts at tackling ACL injuries and can guide you well in preventing them.

“Prevention is better than cure” is the least applied phrase in the modern world. REHAB STATION aims at spreading awareness regarding Preventive Rehabilitation. As sports physiotherapists, they can help you prevent injury and overcome the plateau in your performance!

Curious to know about any aspect of the ACL injury? Just fill out the following form and we’ll get in touch with you right away!