It is simply impossible to separate sports and Mumbai. Cricket has been just as important to the city as local trains. And with time, football is starting to grow as well. However, a new (and surprising) addition to list is Kabaddi – a sport that is gaining popularity amongst masses. And without a doubt, the credit for that lies with U Mumba themselves.

The Mumbai-based franchise has not only been one of the most successful teams in the Pro Kabaddi League but with their popularity and glamour, they are also working to get more people involved in the sport. So before the seventh season kicks off, here is everything you need to know about U Mumba.

U Mumba was one of the eight founding members of the PKL in 2014. Since then, the team has managed to be in the spotlight, either with their performances or various off-field initiatives.

U Mumba were the finalist in the very first edition of the Pro Kabaddi League and went on to win the championship in the second season. The team had India’s star player Anup Kumar as their captain in the first few seasons, taking the popularity of U Mumba to greater heights.

Owners of U Mumba 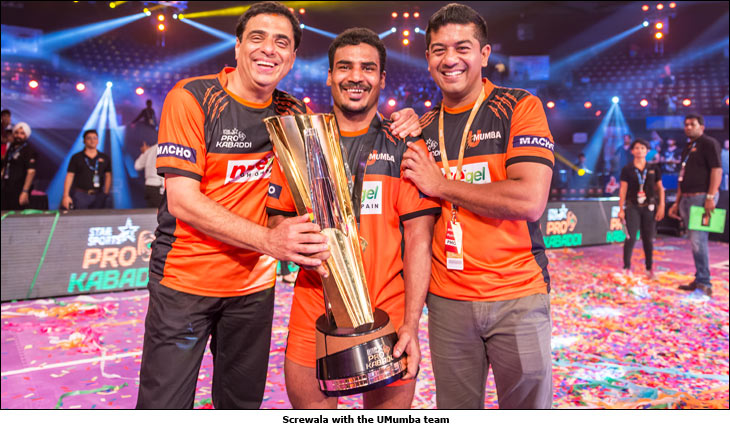 The Mumbai team is owned by Unilazer Ventures, a company run by a famous figure in the Indian Cable Television and the film industry, Ronnie Screwvala.

The company has started a new venture named U Sports, which focuses on developing not just Kabaddi but a number of other sports in India. U Sports has started working in football, motorsports, Volleyball and E-Sports. The company has also started the U Dream Academy to help and develop young footballers of the country.

The company plans to construct a U Mumba arena in the city. They also plan to build a full-time residential academy called ‘U Mumba Gurukul’.

Indigo Paints are the title sponsors of the U Mumba team. Radio City are the radio partners and Gold’s Gym are the fitness partners. Apart from that, the team has partnered with a number of famous brands – Mitashi (Electronic Partner), Fravashi International Academy (Education Partner), and Haldiram’s.

Coach of U Mumba

Sanjeev Kumar Balyan is appointed as the head coach of U Mumba for the upcoming seventh season of the Pro Kabaddi League. The Indian replaced Gholamreza Mazandarani of Iran who coached the team last season. Mazandarani was reportedly replaced due to visa issues.

Upendra Kumar will continue to be the assistant coach of the Mumbai franchise.

Led by Anup Kumar, U Mumba were simply unstoppable in the inaugural season of PKL. The team finished second in the group stages with 8 wins in 14 games. Mumbai won the semi-final against Bengaluru Bulls 27-23 to make it to the first ever PKL final.

But Jaipur Pink Panthers, who had finished ahead of Mumbai in the group stages were simply too hot to handle for Anup Kumar’s team. The Panthers defeated Mumbai 35-24 to win the first ever Pro Kabaddi League title.

Anup Kumar was named the Player of the Tournament with league-best 155 raid-points in total. 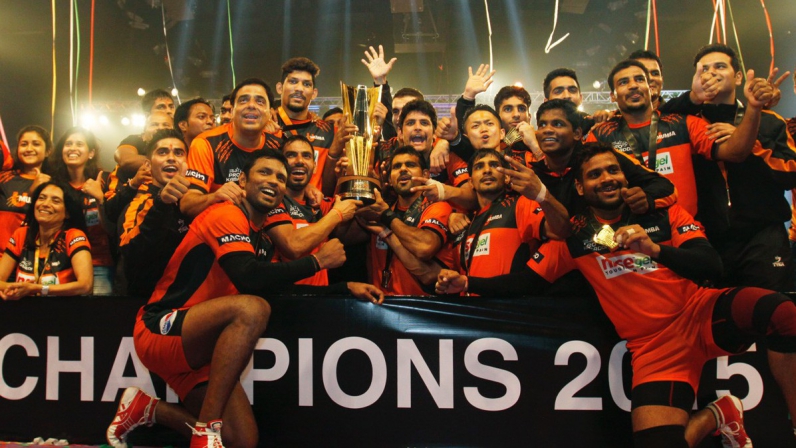 The memories of the defeat in the final did not haunt Mumbai for long as they made up for it in the very next season. The team was set out to get their hands on the trophy and were simply unstoppable in group stages.

Mumbai won 12 of the 14 games in the group stages and finished first with 10 point difference to the second placed team.

They faced Patna Pirates in the semi-finals and cruised past them with a 35-18 victory. In their second consecutive final, U Mumba made amends for the defeat in the previous season’s final, beating Bengaluru Bulls 36-30.

Anup Kumar was once again Mumbai’s best raider with 74 raid-points. The defense was led by Mohit Chhillar and Surender Nada.

Mumbai’s dominance continued for the third season as they finished at the top of the table for the second time in a row. The team won 12 games once again to dominate the first stage of the competition.

Mumbai defeated Bengal Warriors 41-29 in the semi-final to enter the third consecutive final. But Patna Pirates took the revenge for the last season’s semi-final defeat, beating Mumbai 31-28 in the final.

Rishank Devadiga was Mumbai’s best raider with 116 points, second best in the league. Mohit Chhillar with his 46 tackle points was the main man in defense once again.

Mumbai were drafted in Zone A for the fifth season, after the addition of 4 new teams to the competition. But they failed to qualify for the playoffs, the second time in a row.

U Mumba finished 4th in Zone A, winning just 10 of the 22 games. With 56 points in total, Mumbai were 23 points short of the third-place finish.

U Mumba seemed to have gone off track in the past two seasons after failing to qualify for the playoffs. But they found their groove back in the sixth season, finishing second in Zone A. The team won 15 of the 22 games in the group stages and finished with 86 points and a staggering score difference of 189.

But the 2015 champions lost the very first eliminator against Up Yoddha to end their hopes of making it to the final of PKL for the fourth time.

Acquiring the services of the beast Sandeep Narwal and holding on to their defensive rock Atrachali, @U_Mumba are ready to take on the #VivoProKabaddi Season 7 challenge with a new-look squad!

How much will Siddharth Desai's absence affect them? pic.twitter.com/Q9kMqnGDJ4

Mumbai decided to stick with most of their experienced player for the seventh season. They retained Captain Fazel Atrachali, Rajaguru Subramanian, and Arjun Deshwal in the list of elite players.

Anil, Gaurav Kumar, Mohit Balyan, and Surender Singh were the four young players retained before Mumbai went into the auction. Sandeep Narwal was Mumbai’s most expensive buy in the Pro Kabaddi 2019 auction with the all-rounder going for ₹89 lakh.

Home Stadium of U Mumba

Mumbai plays their home games at Sardar Vallabhbhai Patel Indoor Stadium, Mumbai. The stadium has the capacity of 8000 people and is one of the best places to watch the Pro Kabaddi League.

The 2015 champions had a few difficult seasons after their title victory. But with a second-place finish in Zone B, Mumbai team showed what they are capable of. The team will kick-off the seventh season against Telugu Titans in the very first game on 20th July.

After a double round robin format against all 11 teams, Mumbai will be hopeful of finishing in the top six to make it to the playoffs. The final of the seventh season will be played on 19th October.

Chinmay Pagar
I might be a Mechanical Engineer on the paper, but I was a Sports enthusiast since childhood, screaming at the TV watching cricket at the age of 4. Not much excites me other than sports unless it's free pizza. I can watch literally anything remotely related to sports; Cricket, Football, Tennis, F1, Hockey, Athletics, Chess, you name it! And I love to write too, so at the time I'm not watching sports, I'm writing about it. Or eating pizzas, of course.
Previous article
UP Yoddha Team 2019: Players, Records, Sponsors, Owners
Next article
Here’s All You Need to Know About Historic PKL All Stars Match