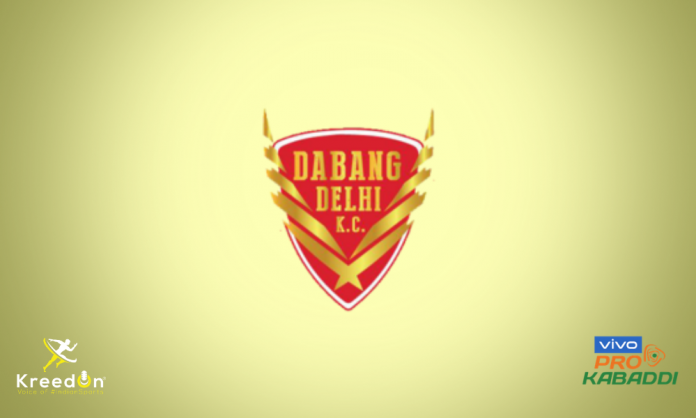 There is something about Delhi and their teams from various leagues. The capital city has failed to produce a title winning team, in IPL or anywhere else. And the Pro Kabaddi League is no different. Dabang Delhi, usually a terrifying name in North India, hasn’t really bossed the PKL so far. But things may not be the same this season.

Like its cricket counterpart – Delhi Capitals – the Dabangs qualified for the playoffs for the first time in six seasons last year. Going by their performances, Dabang will be a force to reckon with this season. Without a doubt, the fans will expect the team to do one better in the seventh season. So before PKL-7 kicks off, here is everything you need to know about Dabang Delhi.

Dabang Delhi has been a part of the Pro Kabaddi League since 2014, the inaugural season. The team is also called ‘The Eagles’ due to their logo which has the shield with wings of an eagle.

Unfortunately, the team has played nothing like their name, being the least successful of the eight founding members. 2018 season was the first time Dabang Delhi qualified for the play-off stages of the tournament.

Dabang Delhi is a venture of DO IT Sports Management India Pvt. Ltd., an organization founded by Ms. Radha Kapoor, the only female owner in PKL. The organization aims to promote various sports and athletes across the country. They have started it with the ownership of the Kabaddi team.

Along with their work in Sports, DO IT Sports Management has also partnered with a number of NGOs in order to generate awareness about various social issues. The NGOs include CRY, HelpAge, Smile, Chhanv and Water Aid.

BKT Tires are Dabang Delhi’s title sponsors for the upcoming season with Reforce as their Kit manufacturers. The team has a number of big names in their list of sponsors, JK Cements, Radio City, Boat (Music Sponsors), Grab On being some of the famous names.

The franchise has done well to partner with a number of famous restaurants in the capital city to extend their reach and get more people involved in the sport. Dabang Delhi has also launched their merchandise on campusmall.in

Krishan Kumar Hooda was appointed as the team’s coach ahead of the sixth season. And he led Dabang Delhi to first ever playoffs in the team’s history. So it goes without saying that the franchise has decided to continue with Hooda for the seventh season.

Hooda is one of the most experienced coaches in PKL with the history of coaching Haryana State team, Haryana Police Kabaddi team and most importantly the national team.

Under his coaching, the Indian team has won SAF Games and Asian Championship on multiple occasions. He has also led Haryana team to two gold medals in National Kabaddi Championships.

Dabang Delhi is the only team to qualify for the playoffs only once in six seasons. In the first four seasons, Delhi constantly found themselves in the bottom half of the table, before finishing dead last of Zone A in 2017. But they bounced back with a third-place finish the very next season, where they even won the first eliminator.

Despite having some of the best raiders in the league, Dabang Delhi failed to qualify for the semi-finals of the inaugural PKL season. They finished 6th in the group stages, winning just 5 of their 14 games and losing eight.

In a repeat of the last season, individual performances could not lead Delhi to the top four finish. In fact, they had the best raider and defender in the league, Kashiling Adake with 114 raid-points and Ravindar Pahal with 60 tackle points, only to finish 7th on the table.

Dropping down one position from the last season, Delhi could only manage 4 wins this time, losing 9 of their 14 round robin games.

The slide down the table continued for Dabang Delhi with each passing season, finishing with a wooden spoon in the third season. In their worst performance to this date, Delhi could only manage one win in 14 games.

The team lost 12 games and tied one to finish eighth in the table. The score difference of -142 tells you what a horrible season it was for Dabang Delhi.

Things could not get any worse for Dabang Delhi than they were in the third season. But they hardly changed six months later with the team finishing just one spot above their third season finish.

Delhi won 4, lost 9 and tied 1 of their 14 games in the group stages to finish 7th in the table with 29 points. Kashiling Adake was Delhi’s best raider once again with 78 points. Sachin Shingade was the team’s best defender with 44 tackle points, 4th best in the league.

This was the fourth consecutive time Dabang Delhi failed to make it to the semi-final stage of the Pro Kabaddi League.

After failing to finish in the top 4 in the first four seasons, Delhi now had a different equation to qualify for play-offs – finish in the top 3 in the group of six teams. With the introduction of 4 new teams, Dabang Delhi were drafted in Zone A for the group stages.

But it simply wasn’t meant to be for the Eagles as they finished with a wooden spoon, the second time in the team’s history. Delhi lost a staggering 16 games of 22, winning just 5 and finishing with a score difference of -134.

After five seasons and being the only team to never qualify for the semi-finals/playoffs, Delhi gave their best performances in the sixth season of PKL. Appointing Krishan Kumar Hooda as the head coach of the team worked wonders for Delhi.

The team finished third in Zone A and qualified for the play-offs of PKL for the very first time. They won 11 of their 22 games, lost 9 to finish with 68 points.

In their first eliminator, their first ever knock-out game in the team’s history, Delhi faced Bengal Warriors and won the game 39-28. But they failed to get the win in the next eliminator, losing 33-45 against UP Yoddha.

Despite their best ever finish in the PKL history, Dabang Delhi decided to change most of their team, retaining just two elite players – Meraj Sheykh and Joginder Narwal.

Thyagaraj Sports Complex, New Delhi is Dabang Delhi’s home stadium for the Pro Kabaddi League. The stadium has the capacity of 5,000 people. It is also famous for being the only Green stadium in the country.

After a much-improved performance in the sixth season, Delhi will hope to go even further in the upcoming season. Two retained players, Captain Joginder Narwal and Meraj Sheykh will be crucial to Delhi’s chances in the league. Dabang Delhi will start their campaign against Telugu Titans on 24th July.

Chinmay Pagar
I might be a Mechanical Engineer on the paper, but I was a Sports enthusiast since childhood, screaming at the TV watching cricket at the age of 4. Not much excites me other than sports unless it's free pizza. I can watch literally anything remotely related to sports; Cricket, Football, Tennis, F1, Hockey, Athletics, Chess, you name it! And I love to write too, so at the time I'm not watching sports, I'm writing about it. Or eating pizzas, of course.
Previous articleSanjay Manjrekar Biography | Age, Career, Commentary, Family
Next articleIncredible! Indian Weightlifter Smashes 3 World Records

Stunning Narwal Takes Patna Pirates to a 41-30 win over Pink...