History of Indian sports has been an amalgamation of pleasant surprises and dismal results. Well, this is why we love sports, don’t we? From winning the first World Cup to winning the third, India sure has made exponential progress in our most loved sport, Cricket. In some sports, however, we have seen little, but positive progress.  But what events stood out more than the others? Let’s find out in the list of  6 most iconic moments in the history of Indian Sports.

What are the first few names that come to your mind when you associate hockey with India? Most probably Sardar Singh, Dhanraj Pillay and Dhyan Chand? But have you ever heard of the names Surjit Singh, Michael Kindo, Onkar Singh, BP Kaliah etc? Well, these were some of the names that helped the India team lift the inaugural Hockey World Cup in 1971. India defeated Pakistan in the finals of the tournament  held at Kuala Lumpur to lift the coveted trophy.. In that tournament, India topped their group with 3 wins, 1 draw and 1 loss and then  beat the hosts Malaysia 2-1 in the semi final before beating arch rivals Pakistan in the finals. Our subsequent hockey teams haven’t been  able to achieve the same feat ever again. 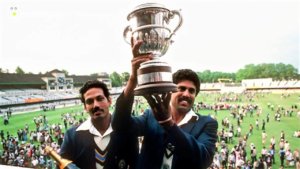 Which Indian can ever forget 25th of June, 1983 when India defied all odds and defeated the mighty West Indies to win their first ever World Cup. It would take the strength of all the cricketing teams combined to defeat the star-studded West Indies team, which comprised of Desmond Haynes, Sir Vivian Richards, Malcolm Marshall, and Michael Holding. West Indies had already beaten India in the group stages and were most likely to do the same on the day of the final. But, on the day, Kapil Dev and company turned up with their A-Game and scripted history.  India batted first and scored 183 with Kris. Srikanth top-scoring with just 38 runs. In reply, West Indies got to the worst possible start when Balwinder Sandhu sent Gordon Greenidge to cleaners. Since the first wicket, West Indian innings only went down the hill and the wickets toppled like a pack of cards. Eventually, Mohinder Amarnath clean bowled Michael Holding and India won the match by 43 runs. That match, without a shadow of a doubt, can be safely considered as one of the biggest upsets in the history of the sport. 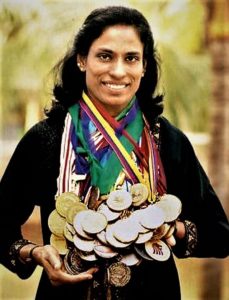 Do you know how many medals did India win at the recently concluded IAAF World Athletics Championship? Do you know how many medals has India won since the tournament’s inception? You’ll be amazed to know that India’s medal tally at world championship remains a paltry ONE. That sole World Championship medal was bagged by Long Jumper Anju Bobby George at the 2003 Paris world championship. She became the first Indian athlete ever to win a medal in Athletics World Championship. Anju recorded a jump of 6.70m that helped her bag the Bronze medal. Since, then, Anju won 2 Golds and Silvers in various tournaments and went on to become the most decorated Indian female athlete ever.

Abhinav Bindra won India’s first ever individual Olympic gold medal at the 2008 Beijing Olympics. Bindra came back from behind in the final stages and almost shot a perfect 10.8  in the men’s 10m air rifle shooting competition to beat the favorites Henri Hakkinen from Finland and China’s Zhou Qinan. Bindra won the 2006 World championships and finished seventh in Athens in 2004.  He successfully carried his prime form of these preceding tournaments and capitalized on every opportunity that came his way. Bindra also bettered his shooting sports counterpart, Rajyavardhan Singh Rathore’s Athens Olympics performance, who clinched a silver in the men’s double trap shooting event. 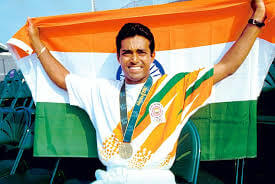 Leander Paes is one of the best Tennis players India has ever produced. Best known for his stint as a doubles player, Leander Paes has won a total of 55 career mixed doubles titles. However, one victory that particularly stands out is his  2010 Wimbledon win, where Paes and his mixed doubles partner Cara Black defeated the pair of Wesley Moodie and Lisa Raymond 6-4, 7-6(5) to lift the coveted title. That victory also meant that Leander Paes became the first player after legendary Rod Laver to win three different Wimbledon Titles in three different decades. The first one came in 1999 when he paired up with Lisa Raymond from USA to beat Anna Kournikova and Jonas Bjorkman 6-4,3-6,6-3 in the finals. The second came 4 years later when he clinched his second Wimbledon mixed doubles title with his Martina Navratilova. Interestingly, Paes won his 4th Wimbledon mixed doubles title in 2015 with his Swiss partner, Martina Hingis. Leander Paes sure loves Wimbledon and he definitely loves having a partner on the grass court.

How can we not talk about one of the most talked about moments in the history of cricket? Sachin Ramesh

Tendulkar became the first man on planet earth to score hundred international centuries. Sachin getting to the milestone against Bangladesh at the Shere Bangla Stadium in Mirpur, on March 16th, 2012. It ended a year-long wait for one of the most discussed landmarks in cricket history, and was his first ODI hundred against Bangladesh, completing his set of centuries against every Full Member country in both Tests and ODIs. Sachin amassed a total of 34,357 runs in 464  matches over a span of 24 years of his career. Second to Don Bradman or better than him? It’s a never ending debate.

Shivansh Gupta
Sports journalist working towards bringing unsung heroes of Indian sports into the limelight and helping them grab the attention and respect they deserve. A foodie and a sports fanatic since childhood, Shivansh would prefer watching an old match (from any sport) over a hit movie or series. Shivansh has spent his formative years in Tanzania before shifting to Pune for college
Previous articleSrikanth Kidambi – Information and Profile of India’s most Prolific Shuttler
Next articleEvolution of Indian Cricket Jersey