The 2018 commonwealth games are just around the corner. Preparation by Indian athletes is in full swing as the D-day nears. Our athletes have performed exceedingly well in the previous version winning India medals at one of the biggest sporting event of the year. Traditionally, if we look at India’s performance at the CWG, we are always in the top 5. However, as new athletes come, it does raise the number of India medals that we currently count upon.

India Medals Hopefuls – Moving on from a dreadful Rio Games

The 2016 Rio Olympics was a disastrous campaign for India. India, who won only two medals at Rio Olympics with other medal prospect looking bleak, does not reflect the true medal winning potential which exists in our athletes. And let’s not just blame the athletes for the poor show; there are additional reasons for such a dull show.

Inadequate spending on sports development is hurting India’s medal-winning chances in a big way. The amount of funds that our sportspersons receive for preparing themselves for big sporting events is just a fraction of what other countries spend. In our recent article depicting the India –UK sports development program, we clearly mentioned, how the United Kingdom spends 6 million Euros for every medal that it wins. Though with the country as big as India, it is not possible to spend 6 million Euros on each athlete, but even half of this amount can do wonders.

This sort of investment will increase the number of medal hopeful, not just for the 2018 commonwealth games, but also for the 2020 Tokyo Olympics. Another vital reason there are not many ‘India medals hopeful(s)’ in our nation, is due to the fact that sports is not the first choice as career for most youngsters. Most of them drop out because of high risk, uncertainty and low rewards. We are not blaming any particular government, but the political parties that rules us over the years, have done absolutely nothing with regards to developing a sporting culture in the country.

However, with new government in power, it is positively doing its best to recognize and nurture talent from a young age. The flagship program Khelo India School Games, is one such initiative to “catch them young”. But, only time will tell, how well it turns out to be. Till then, let’s hope our current crops of athletes are our medal hopeful in the upcoming school games.

Here are 5 sports events that can win India medals at the 2018 Commonwealth games, at Gold Coast, Australia.

The sport of wrestling has always churned out world class athletes for and from India. Despite the doping controversies, which some of the players are mired with and poor performance of the players in Rio 2016 games, wrestling as a sport is sure shot medal hopeful category for the Indian contingent at the 2018 CWG.

In London Olympics of 2012, Sushil Kumar bettered his 2008 performance and won a silver medal capturing the imagination of Indian masses. This gave a huge boost to India’s mud sport in both viewership and infrastructure availability.

The humiliation at the Rio Olympics of not winning a medal in men’s category was amply balanced by the heroics of Sakshi Malik. A small town girl from Haryana bulldozed the opponents, winning a bronze medal of India and opening the medal tally at Rio.

Such inspirational stories are bound to inspire the untapped talent who have it in them to excel at international level. But due to lack of resources and unavailability of infrastructure are unable to pursue the sport. 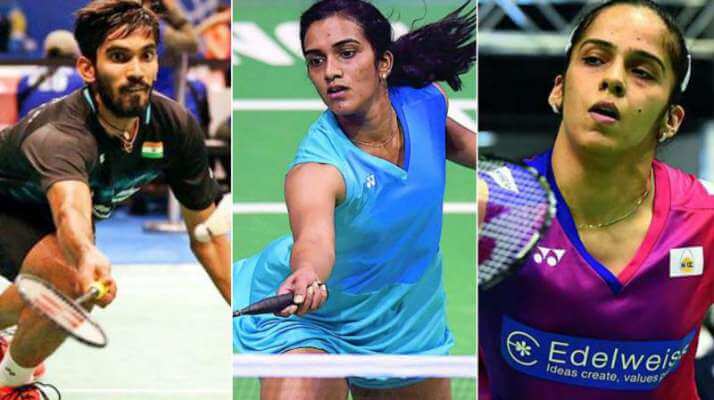 If we talk about popularity of a sport in India that has risen quite drastically in the last decade, it has to be Badminton. Indian Badminton players over the years have not just made us proud at the BWF and Super Series events; we have thoroughly dominated the CWG, Asian Games and also the Olympics to some extent.

In Olympics history badminton players in India has only won two medals. In 2012 London Games it was Saina Nehwal who created history winning a bronze medal. PV Sindhu rose to the occasion at the 2016 Rio games, as she outperformed everyone except the finalist, to become the first Indian women to win a silver medal at the Olympics.

One thing, team KreedOn is bullish about, not just at the upcoming CWG games, but also the Olympics, is Badminton. Indian shuttlers top our list of medal hopeful(s). There are reasons to support them fully.

This may come as a surprise for most of you, but yes we have a medal hopeful in gymnastics as well. Dipa Karmakar became the first women gymnast from India to qualify for Rio Olympics after her stellar performance in world championship in 2015. Dipa became the first female gymnast to qualify for the quadrennial mega event after 52 years.

If you remember, Dipa was one of the five women athletes that successfully landed the very difficult Produnova vault in competition. This was also her highest score amongst all (15.100) her attempts.

Dipa Karmakar hails from the remote state Tripura where infrastructure is rudimentary.

Even though, she didn’t win a medal at the Rio games, she won billions of hearts and inspired a huge amount of people to take up gymnastics. Coming from remote regions, where infrastructural facilities are not up to the mark to pick up such sports and excel is commendable. Therefore, after such a stellar show in Olympics, we at least expect a podium finish from her at the 2018 commonwealth games.

In the shooting sports Indians have a consistent performance at Commonwealth Games, Asian Games and World Championships. India at the 2016 Rio Games sent a contingent of 12 members for shooting. The medal hopeful(s) from this team were many, but things could not materialize. Indian returned with zero medals.

However in the Indian Olympic history shooting is a sport that India has excelled at in the recent past with four Olympic medals. This is second highest after hockey. In shooting India has won gold, two silver and one bronze. Therefore, in-spite of a dull show in the past couple of years, the sentiments are bullish of India winning medals in shooting at the 2018 CWG and 2020 Tokyo games.

If you observe, the infrastructure provided to the Indian shooters have also improved drastically over the years. The sports administrators are also very active, and there is a good policy in place where there are 6 to 7 trails everywhere. It’s from here the best athletes are chosen to participate in tournaments.

A combination of these improvements will raise the bar of our shooting contingent in the upcoming events.

This may come as a surprise, but the current Indian Hockey team is a force to reckon with. A continuous upward surge in their game play, plus exposure with international players in Hockey India League is an added advantage. Over a long period of time Indian hockey was dominant in the Olympic competitions winning 11 out of 12 times between 1920 and 1980. However, the situations started deteriorating after adoption of synthetic courts in all major tournaments.

As of now, the Indian hockey team has shown tremendous improvement under the guidance of Coach Roelant Oltmans, which takes them on our list of medal hopeful for the upcoming sporting events. We need to take one step at a time. Remember than we didn’t even qualify for the 2008 Olympics and were last (12th) at the London games.

The team is showing constant improvement which raises the number of India medals hopefuls at the at the 2018 Gold Coast, Commonwealth Games.

Vardan Pandhare
Vardhan is an author who loves creativity. He enjoys experimenting in various fields. After completing his graduation, he was sure about one thing! His love for sports. He is now living his dream of being creative with words in the field of sports. He has since then always brought the latest news and updates for all the sports fans.
Previous article
India Under 19 World Cup – The Future Stars of Indian cricket have arrived!
Next article
Former and Current sports legend laud Khelo India School Games

PV Sindhu will be India’s Flag Bearer at the 2018 Commonwealth...