The 2018 sports calendar will feature all major sports India plays and participates in. Right from cricket, hockey, badminton, Commonwealth and Asian games, fans should gear up for a sporting year. With round-the-year sports action available, we present you the main events that will keep you glued in front of TVs or mobile phones.

While 2017 saw India consolidate in many sports, Indian team captain Virat Kohli and Rohit Sharma shone as cricketers. Badminton players like Kidambi Srikanth, PV Sindhu and HS Prannoy rose to occasion, clinching multiple titles. The 2018 sports calendar should be a good indicator of where India really stands as a sporting nation.

2018 sports calendar as mentioned earlier will be big for almost all major sports India plays. However, the headline sporting event of the year 2018 is the one in which India won’t participate, FIFA World Cup. What may come as a shocker to soccer fans, the tournament will be missing 4-time world cup winners Italy. Chile and three time finalist Holland also failed to qualify in the list 32 nations.

But, Indian fans can sit back and revel in the neutral corner during the FIFA World Cup. They have another reason to bite their nails, which is during the Commonwealth Games in April. Also, during August-September months Indian fans can enjoy our Athletes at the Asian Games.

The 2018 sports calendar itinerary, of January-February, June-September and November-January 2019, will witness the ‘Men in Blue’ take on the biggies. South Africa, England and Australia, is where the Indian Cricket team will be for most time this year.

2017 saw India achieve extraordinary success across formats. But the overseas Test exploits were restricted to only Sri Lanka. The year 2018 presents Virat and Co. the opportunity to slay the demons of genuine domination on wickets abroad.

First up we have the three match Test series in South Africa, from which we already lost one. The pace attack of Dale Steyn, Kagiso Rabada, Vernon Philander and Morne Morkel was just too hot to handle for the boys. The English team along with Stuart Broad and Jimmy Anderson will be next from June to September. India will play five Tests spanning the English summer.

India’s last two Test series in in England were dismal for Indians. Captain Kohli himself got a mere 134 runs from 10 innings in 2015. If the skipper has to become the undisputed king of modern-day batters, he needs to succeed in England.

At the end of 2018 sports calendar, team India travels down under. The Aussie pace attack consisting of Josh Hazlewood, Mitchell Starc, James Pattinson and Pat Cummins will give the batsmen a test of character.

With one eye on the 2019 World Cup, 2018 shall determine the One-Day squad that will start to take final shape from the second half of the year. The selection committee led by Chief Selector MSK Prasad has backed MS Dhoni to continue till the world cup.

India’s Under-19 boys will play the World Cup in New Zealand from January-February. The boys came close to win the trophy in 2016, but a resurgent West Indies stopped them. The Indian women team will host Australia and England for ODIs and T20s as part of the ICC Women’s Championship in November.

Sports and Politics is not just a problem in India, but the world over. Just like Olympics, the Football World Cup, too, is habitually seen through the prism of politics. It is often a test for the host country.

Russia will host the FIFA world cup from 14th June to 15th July. Politically, Russia has been accused of everything from meddling with the US elections to state-sponsored doping. The doping scandal resulted Russia being booted out of the Winter Olympics of 2018.

In the current climate of geo-political scenario it will be a tough task for Russia to peacefully host players from 32 nations. This includes the fans from world over who will come there to support their teams.

However, the friendly atmosphere seen at the FIFA Confederations Cup in June-July of 2017 indicated those fears may be unfounded. The world cup qualification campaign saw the dramatic failures of powerhouses Italy and Holland. The qualifier also witnessed the fairy tale successes of lightweights Iceland and Egypt.

This world cup will also be the last chance for two modern day greats to lift the coveted trophy. 2018 FIFA world cup in Russia in all probability will be last time Lionel Messi and Cristiano Ronaldo fight for the only trophy missing from their cabinets. For the hosts, the tournament will be played to make a statement to the one that China did with its spectacular conduct of the 2008 Olympic Games.

The XXI Commonwealth Games in Gold Coast, Australia, will be held from April 4-15. For the first time ever the multi-sport event will have an equal number of events for women and men. A substantial breakthrough for gender parity in sports.

For Indians, the games will bring boxing legend M C Mary Kom back into the ring. The 45-48 kg weight category is back. The mother of three is the most comfortable in this division. Two additional medals will also be up for grabs in the women’s 54-57 kg and +75 kg divisions. More medal events for women will be available in weightlifting and cycling too.

The XXI CWG might be the last stomping ground for India’s golden generation of shooters. The sport is likely to be excluded from the 2022 Games.

In 2006 CWG, Melbourne, Indian shooters won a bagful. It was here that pistol shooter Samaresh Jung earned the nickname as the ‘Goldfinger’. The Games will be a good preparation ground for active Olympic stars like Sakshi Malik, Sushil Kumar, P V Sindhu and Saina Nehwal. While badminton, shooting and wrestling will be the low-hanging fruit, India will look to make it big in athletics and hockey too. Any medal in swimming, gymnastics and basketball will be a new ground broken.

The big attraction from the beautiful Gold Coast will be beach volleyball. The Indian contingent will also participate in the para-sports. With 300 para-athletes and 38 medal events across seven sports, including the first ever wheelchair marathon (T54), Indian fans have a reason to get excited.

The Asian Games is an extremely serious matter for countries like China, Japan, India, the Far East and the Middle East. The 2018 Asian Games will be hosted by Indonesia  between 18th August and 2nd September. India has a good chance of winning Gold in Hockey and individual and team badminton events. Also, no matter how many medals the wrestlers win at CWG, their real test will come against Asian giants Uzbekistan and Japan.

Even if he wins a gold medal the CWG 2018, Sushil Kumar’s career will be incomplete without Asian games gold. Same is the scenario for Saina Nehwal and the rest of the Indian badminton players. For shooters, the biggest test will come at the mixed event (men and women on a team). This also presents a chance for Jitu Rai and Heena Sidhu to come back from the slumber.

For the kabaddi team, it’s gold or nothing. Making a comeback after her surgery, Dipa Karmakar will showcase her flips and rolls once again.

This is the first time Asian Games 2018 will see more than one city host the Games. This model is definitely a necessity for India, and we might want to emulate.

But…but…but, the chief attraction at the Asian Games is likely the maiden entry of e-sports. As a demo sports event video games will be introduced.

Badminton as a sport is scaling new heights in India. More and more youngsters are showing active participation for the sport. If 2017 was the year of Kidambi Srikanth and PV Sindhu, 2018 has a bunch of Indian competing for glory. Termed as India’s sunshine sports with multiple contenders and consistent results, 2018 shall stamp that authority.

The 2018 Sports calendar for Badminton has two Grade 1 tournaments, the Thomas and Uber Cup Finals. The events will be hosted in Thailand in May. Then there is the World Championships in China in late July.

Badminton’s big names are expected to peak on multiple occasions, including the CWG and Asian games. The revamped schedule for the BWF calendar also allows the A list players to pick the tournaments they want to focus on, and aim for the big finals. 2017 was glorious for P V Sindhu and Kidambi Srikanth, even though the big title eluded both. The 2018 Thomas Cup will be a test also HS Prannoy and Sai Praneeth.

Fans will expect Saina Nehwal to work hard to follow up on her remarkable World Championship bronze in August 2017. H S Prannoy’s test will be to step up and convert his big game into titles.

As far as rivalries are concerned it is Japan, and not China that has been our nemesis.

Along with the above mentioned sports events, the Indian men and women hockey teams will also be in action. The men will play at the Hockey World Cup hosted by India, while the women team will travel to England in mid-2018 to participate in the world cup.

A packed schedule for all sports discipline, Indian fans will be treated to some extravagant action this year.

Here is our exclusive 2018 Sports Calendar: 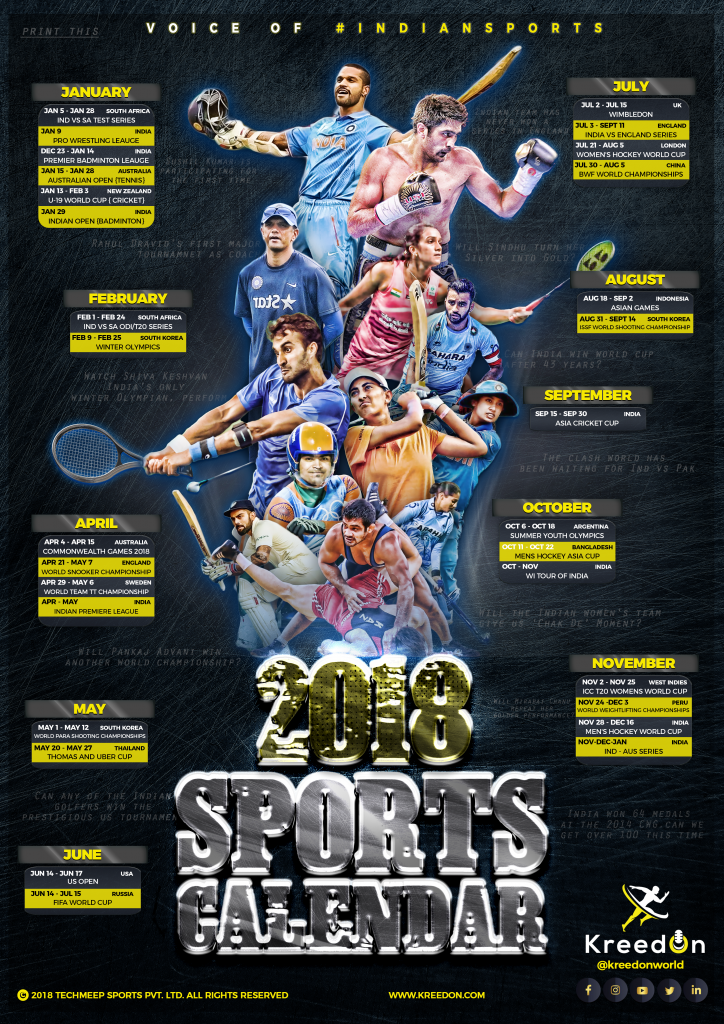 Vardan Pandhare
Vardhan is an author who loves creativity. He enjoys experimenting in various fields. After completing his graduation, he was sure about one thing! His love for sports. He is now living his dream of being creative with words in the field of sports. He has since then always brought the latest news and updates for all the sports fans.
Previous articleNew Delhi to host the first ever Indian Open Boxing Championship
Next articleMumbai Marathon 2018– World Champions and Indian Legends to Grace the Run