Without a doubt India is cricket obsessed nation but it doesn’t mean India hasn’t brought laurels in other sports. Talking about boxing, it is a popular sport in our country. There are many talented Indian boxers who already have gone for glory at international stages. Here we are talking about best Indian boxers of all time.

The world of boxing includes some of the famous personalities of India. If you’re are an aspiring boxer professionally, then these Indian boxers should be your idols. If you’re searching for a popular boxer from India, you are at the right place. Here we have the 10 best Indian boxers of all time.

One can see his Wikipedia page of just one paragraph but his career in boxing makes him one of the top boxers in India. He was the first Indian to win gold in the Commonwealth Games in 2002. Qamar’s father registered his name into boxing at a very young age at Kidderpore School of Physical Education in Kolkata. He came into light when he won Inter-district champion in West Bengal in 1991.

Blood, sweat, and tears are the main factors behind Shiv Thapa’s boxing journey. Shiva has already participated in two World Championships, two Asian Championships, one Asian Games, one Commonwealth Games, and the Olympics in 2012. The 25-year-old has clinched gold at the Asian Championship in 2015, a silver medal at the Youth Olympics in 2010, and the bronze at the Worlds in 2015. The Arjuna Awardee’s journey is no one-night wonder. From waking up at 3:00 am to manage his training and studies, he is one of the most determined boxers in India. Shiva is always destined for a fruitful career. He comes from a family of combatants. His father was a karate instructor in Assam whereas his brother Gobind Thapa is also a state-level medal-winning boxer.

The incredible story of Dingko Singh’s has inspired many boxers from including Mary Kom. Born in 1979 in a tiny village of Manipur, he grew up in an orphanage as his family was not able to raise a little boy due to financial conditions. He at that time in the hostel pandered in a lot of fights with others. His hidden talent was recognized by the trainers of Special Area Games, a scheme initiated by the Sports Authority of India.

At the age of 10, he won the Sub Junior National Boxing Championship in Ambala, Punjab. From here his journey turned into success. He won the King’s Cup 1997 in Bangkok. Dingko stroked a gold medal at Asian Games 1998. In the same year, the government of India honored him with Arjuna Award and gave him a home as well as a job in the Indian Navy. For his awe-inspiring journey, he was also conferred with Padma Shri in 2013.

The 27-year-old Vikas Krishan Yadav from Haryana is in the list of best Indian boxers. He started professional boxing at the tender age of 10. For learning skills, Vikas joined Bhiwani Boxing Club in Haryana and later joined the Army Sports Institute of Pune. He grabbed the attention of the entire nation in 2010 when he won the gold medal in the 2010 Asian Youth Boxing Championship, Tehran, Iran. From there, he never looked back and went on winning the Bronze medal in Summer Youth Olympic in 2010 and bronze in the Asian games 2014. Last year, he became the first male boxer from India to claim gold medals at both the Asian and Commonwealth Games (gold).

Jitendra Kumar was born in the year 1988 in Devsar, Bhiwani, Haryana. He represents India as a flyweight boxer. The ace boxer won bronze at the CWG in 2006. He was also part of the Indian boxing contingent that participated in the 2008 Beijing Olympics Games.

The real-life Rocky Balboa of India! Akhil Kumar is one of the most decorated boxers in India. Akhil, who started boxing in a ring in Gurgaon moved to Bhiwani, has come a long way. The son of a jail warden was among those who were flounced by cricket. He was just two when India won the 1983 World Cup. Akhil Kumar learned from his elder brother that they cannot afford to waste the resources in pursuing the willow. He needed some fiery game to start with. Akhil Kumar carved his name on a gold medal in the Commonwealth Games 2006. Keeping his form, he also bagged bronze in Asian Championships 2007. One can say, his heart beats for boxing!

We bet today’s generation may not have even heard this name. One can ask their father or grandfather, surely they will narrate to you how great this boxer was. In the 1960s and 1970s, there was no better boxer than Hawa Singh not only in India but in Asia. His dominance in the sport was so complete that he went onto win the national championships eleven years in a row (1961 to 1972).

He was the founder of the Bhiwani Boxing Club. His style of coaching is based on the Army format and has been known to produce 4 out of 5 boxers that represented India in the 2008 Olympic Games. The best student: Vijender Singh. For his incredible work in boxing government of India conferred Hawa Singh with the Arjuna award in 1966 and the Dronacharya award in 1999. 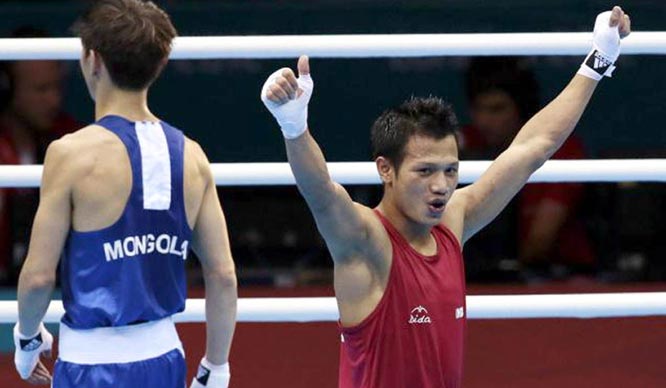 Devendro Singh, a silver medallist in Commonwealth Games was bested by two-time Olympic medallist and Euro champion Paddy Barnes in the gut-gripping final of 2014. He also has two Asian Championship medals (silver in 2013 and a bronze in 2015) in his medal cabinet. The boxer from Imphal in Manipur now is working as a boxing coach. Devendro Singh represented India in the Rio Olympics 2016. Stationed at the Army Sports Institute in Pune, Devendro is helping the Services boxers prepare for the bouts.

One more female boxer joins the list. Laishram Sarita Devi from Manipur comes in the list of best Indian boxers. It is rightly said, the life of an athlete is tough but tougher if you’re a woman. These words hold true for Laishram Sarita Devi. The iron lady is a former world champion and four-time Asian champion boxer and has spent more than 15 years inside the square ring. Turning professional in boxing in 2000, inspired by the achievements of Muhammad Ali, she has bagged medals in many international competitions for India. For his achievements, the government of India has conferred her with Arjuna Award in 2009. The silver medallist at the 2014 Commonwealth Games, Glasgow, Scotland, Laishram Sarita Devi is a loving mother of a five-year-old kid and serves as a guiding light amongst the budding boxers.

Meet the great Indian boxer who won India’s first Olympic boxing medal. Coming from an ordinary family, Vijender Singh is a real role model for millions. He hails from Kaluwas village in Haryana. His father Mahipal Singh Beniwal was a Haryana Roadways driver and his mother, a housewife. To better his job scenes, Vijender and his elder brother Manoj once made minds to learn boxing. His hard work paid off and he became the first player in India to win a medal (bronze) at the Beijing Olympics. The Padma Shri awardee is currently WBO Asia Pacific Super Middleweight Champion and WBO Oriental Super Middleweight Champion.

Akshay Badwe
The God taught me to love everybody but the most ones I learned to love are the athletes. Desire, determination and discipline takes me to a great deal of love towards sports. One can call me an avid sport maniac because I love to pen down some glorious content on sports. Being from journalism background with experience in media from couple of years I would like to keep this legacy going and now joining Kreedon gives me one more platform to explore the new world. I am always up to have a word on sports with a coffee.
Previous article
IND vs SA Dream11 Prediction | Fantasy Cricket Tips
Next article
Next Gopichand? This 13-year-old Indian shuttler only hits gold