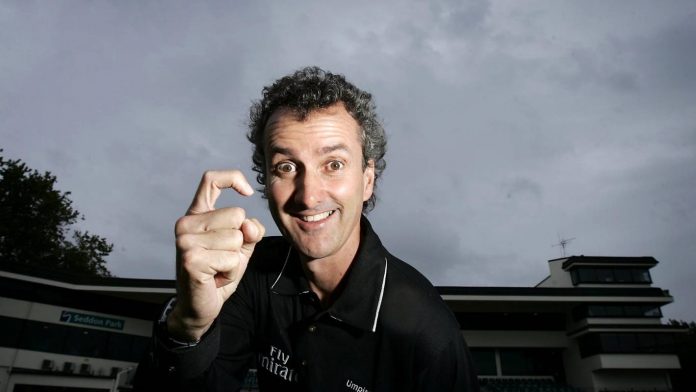 Umpiring is one of the most crucial and difficult parts of any sport. And in Cricket, umpires have it more difficult than any other Sport. It takes some serious talent to judge if the batsman has edged the ball from as far as 22 yards or to give an LBW decision.

But despite the difficulty level of their job, umpiring is not the most popular profession in Cricket. Even a diehard Cricket fan might struggle to name more than five famous Umpires in the history of Cricket.

And that is a shame. Despite DRS and various technological advancements, a lot depends on an umpire in the game of Cricket. One bad decision can swing the game the wrong way and hence, an umpire has to be at his best throughout the game. Umpires are expected to give out the right decision, every time, irrespective of the intense pressure from the fans or the players. The kind of intense focus and decision-making capabilities that goes into the umpiring profession is rarely seen in any other job.

So without further ado, let us take a look at 20 of the best and most famous Cricket Umpires of all time.

Anthony Lloyd Hill or simply Tony Hill to the Cricket World is a retired Kiwi umpire. Tony started his umpiring career in 1998 during an ODI game between New Zealand and Zimbabwe. And he has come a long way since then with more than 150 games officiated in all three formats.

The New Zealander made his debut in test cricket in 2001 and T20 debut in 2005. ICC often appointed Hill for matches away from New Zealand as a neutral umpire. He was appointed to the ICC Elite Panel of Umpires in 2009.

Despite entering the international umpiring without any first-class cricket experience, Hill finished his 15-year career with 64 Tests, 139 ODIs, and 24 T20s. After his retirement in 2013, Hill worked as the New Zealand Cricket umpire coach.

Srinivas Venkataraghavan will always be in the history books of Indian Cricket as the captain of the first two Cricket World Cups. But if you dig a little dipper, Venkat, as he was commonly called, is also the only Indian umpire to make it to the ICC Elite Panel of Umpires.

Venkat made his debut in umpiring in 1993, ten years after his retirement from international cricket. He made both his ODI and test debuts officiating India vs England games during England’s tour to India.

A quality off-spinner during his playing time, Venkat carried his ability to make quick decisions in umpiring as well. At the end of his 11-year career in 2004, Venkat had officiated 79 tests and 78 ODIs. He was honored with Padma Shri by the Government of India in 2003.

READ | 10 Richest Cricketers in the World | Net Worth | Salary

Daryl Harper had an incredible 17-year career in umpiring where he became the first Australian to be included in ICC Elite Panel of Umpires in 2002. The Australian made his first-class umpiring debut in 1987 and officiated the first ODI game in 1994.

Harper made his test debut in 1998 Ashes, officiating at the WACA ground – Some way to make a test debut. In total, the Australian officiated 104 test matches, 221 ODIs, and 17 T20s.

He received ‘ICC Bronze Bails Award’ in 2005 for completing 100 ODI games in international cricket. Usually a calm and accurate umpire, Harper came under fire during the 2011 India vs West Indies test series and was forced into retirement due to ‘performance reasons’.

You might remember the South African umpire due to his white goatee and sunglasses look. But Rudi Koertzen was much more than that. The South African is one of the only two umpires in the history of Cricket to officiate 100+ test matches and 200+ ODIs.

Koertzen made his international debut in 1992 in both ODI and Tests during India’s tour of South Africa. He also became the original member of the ICC Elite Panel of Umpires on its foundation in 2002. Koertzen was also famous for his style of raising his index finger very slowly to adjudge the batsman out.

The South African officiated some of the high-profile games during his career, including India vs Pakistan, The Ashes, World Cup semi-finals, and the Champions Trophy finals in 2004 and 2006.

Koertzen has received ICC Bronze, Silver, and Golden Bails Awards and is the only umpire to receive all three of them. He also became the first umpire to stand in 200 ODIs and eventually finished his career with 206 – most by any umpire to the date. With 128 tests and 19 T20s, Koertzen had one of the best-umpiring careers without a doubt. 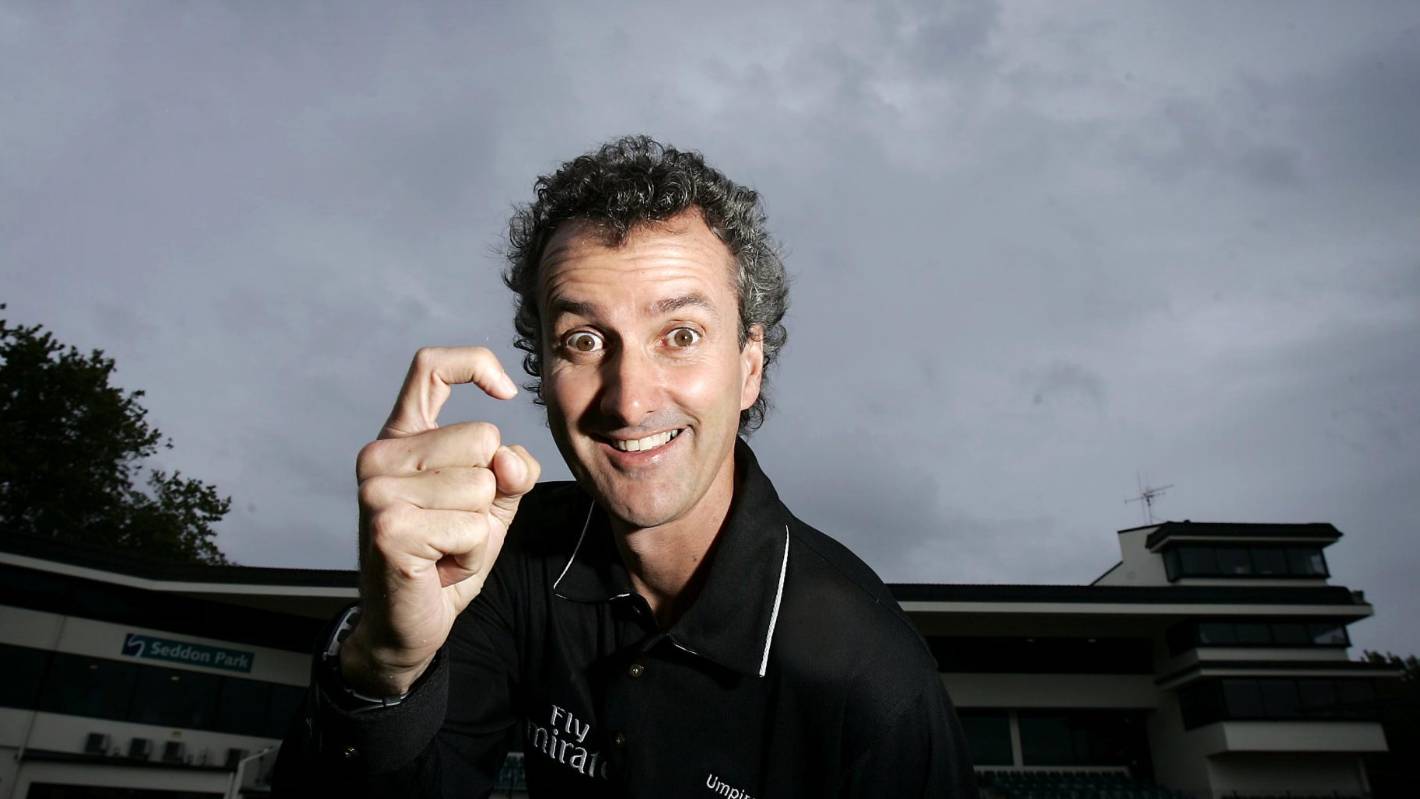 Credits Stuff.co.nzWe all know him and we all love him – the ever-entertaining Billy Bowden. The Kiwi umpire is famous for his dancing signals to indicate four and six. And his famous crooked finger to adjudge a batsman out became so famous that he featured in an advertisement during the 2011 World Cup.

Bowden made his ODI debut in 1995 during New Zealand vs Sri Lanka game at Hamilton. He also became part of ICC’s very first Elite Panel in 2002 and was a regular in almost every ICC tournament for the next decade or so.

The New Zealander retired in 2016 with 84 tests, 200 ODIs, and 21 T20s under his belt. But his unique umpiring style will stay in the minds of Cricket fans forever. How can we ever forget that he once showed a red card to Glenn McGrath on the cricket field?

READ | All About the National Cricket Academy

Another household name amongst Cricket fans and the only active umpire in this list, Aleem Dar is a legend of the game ever before his retirement. The Pakistani umpire made his debut in 2000 and is still going strong after 19 years.

Dar has officiated 125 tests so far, just three less than the current all-time record holder Steve Bucknor. With 200 ODIs under his belt, the Pakistani umpire is second in this list as well, just behind Rudi Koertzen. But Dar holds the record for the most T20s officiated with 43 in total.

The 51-year old has officiated the finals of all three ICC tournaments – World Cup, Champions Trophy, and T20 World Cup. The member of ICC’s Elite Panel, Aleem Dar was the one to break Simon Taufel’s dominance over the best umpire award, winning the award in 2009, 2010, and 2011. He has also been awarded the President’s Award for the Pride of Performance by the Government of Pakistan.

RAED | Types of Bowling in Cricket: A to Z guide

Indians don’t like him a lot for apparently incorrectly giving marching orders to Sachin Tendulkar on more than one occasion. And above all, his involvement in the infamous “Monkeygate” during India’s tour of Australia in 2008.

But take nothing away from Steve Bucknor who has had a fantastic 20-year career in umpiring. The Jamaican will go down as one of the finest umpires in cricket without a doubt.

Bucknor made his international debut in 1989 and in his career of two decades, he became the first umpire to stand in 100 tests. The Jamaican currently holds the record for most tests officiated as well.

He has also officiated 181 ODIs, including 44 matches in 5 different World Cups. But his most unique record has to be the 5 consecutive World Cup finals from 1992 to 2007. Bucknor has received the ICC Bronze and Golden Bails award and Order of Jamaica.

Fun Fact: Bucknor has also officiated a football game as a FIFA referee back in 1988 – A World Cup qualifier between El Salvador and the Netherlands Antilles.

Another legendary name in the umpiring world, David Shepherd was a fine batsman during his time. The Englishman has scored 10,000 plus runs in First-class cricket. After retiring as a player in 1979, Shepherd turned to the umpire and quickly became a part of the 1983 World Cup.

Famous for his habit of lifting one foot off the ground whenever the score reached 111, Shepherd’s “Nelson” was considered unlucky for the batting side. A cheerful character on the field, Shepherd died of lung cancer in 2009.

But he left a mark on cricket umpiring and ICC decided to name the award for the best umpire after him – “The David Shepherd Trophy”.

Although the award for the best umpire was named after David Shepherd of England, it was dominated by Simon Taufel of Australia. Since the award’s inception in 2004, Taufel won five consecutive awards until 2008.

The Australian started umpiring at just the age of 24, after having to give up on his cricketing career due to an injury. Taufel made his debut in 1999 at the age of 27 and continued to be amongst the best until his retirement.

He made his Test debut on Boxing Day 2000 in a match between Australia and West Indies. Taufel was known for his accuracy and sublime decision-making and was famous amongst the players and experts.

The Australian has officiated 74 tests, 174 ODIs, 34 T20s, and was the youngest to reach 100 ODIs at the age of 36. But he had to wait until the 2011 World Cup to officiate the final of the famous competition, due to Australia’s dominance in previous editions.

Taufel shockingly retired in 2012 at just the age of 41 but took on a new challenge as ICC’s Umpire Performance and Training Manager.

Harold Dennis “Dickie” Bird – Arguably the best cricket umpire of all time! The Englishman was loved by everyone in the cricket world, fans, opponents, players, and experts during his 23-year umpiring career.

Having to give up football due to an injury, Bird turned to cricket where he had a below-average career. The Englishman then turned to umpiring in 1970 and made his international debut in 1973.

Bird officiated 66 tests and 69 ODIs and managed to earn the respect of even some of the most hot-blooded players on the field with his humor. He was also one of the very few umpires to have a fan following of his own. In a very famous incident during the inaugural World Cup, a fan ran on the field after the game to grab Bird’s hat.

RAED | Bamboo Bats: The future of Cricket | All you need to know

READ | 11 Famous brothers in cricket history who glorified the game

Chinmay Pagar
I might be a Mechanical Engineer on the paper, but I was a Sports enthusiast since childhood, screaming at the TV watching cricket at the age of 4. Not much excites me other than sports unless it's free pizza. I can watch literally anything remotely related to sports; Cricket, Football, Tennis, F1, Hockey, Athletics, Chess, you name it! And I love to write too, so at the time I'm not watching sports, I'm writing about it. Or eating pizzas, of course.
Previous article“See you on the other side!” Yuvraj’s Full Emotional Retirement Statement
Next articleA Quick Guide on Wrestling Rules | Basics, Scoring System, Tips

7 players with most sixes in T20 internationals | Updated 2020