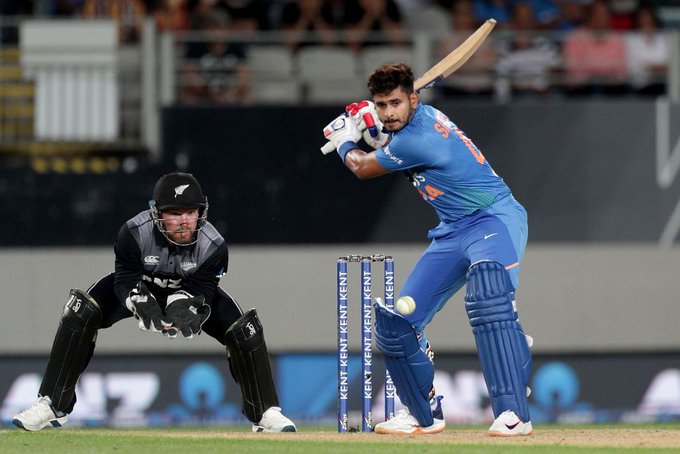 Shreyas Iyer further gave a boost to his reputation as a clinical finisher by scoring a sublime 29-ball-58 as India started their 5-match T20I sojourn in New Zealand with a six-wicket victory on Friday.

Chasing a 200+ score, Iyer held the fort after KL Rahul (56 off 27 balls) and Virat Kohli (45 off 32 balls) had given the blazing start. The Men in Blue ultimately chased the total with an over to spare.

Earlier in the day, opener Colin Munro and skipper Kane Williamson had hit quick-fire half-tons to help New Zealand to 203/5.

Wow, what a finish! Shreyas Iyer has played innings of the match to take India from a sort of crisis to commanding victory

In the second innings, the visitors lost Rohit Sharma (7) early after the opener tried to play get past spinner Mitchell Santner (1/50).

However, Rahul and Kohli ensured that the team was in a commanding position of the chase by putting a partnership of 80-run coming off just 47 balls laced with four sixes and seven fours as NZ struggled to contain the runs.

The Men in Blue crossed 100 in the ninth over courtesy of the duo’s partnership. However, they had their own good luck to thank for as well.

Rahul survived a sure-shot run out twice after NZ failed to hit the stumps while Ish Sodhi was unable to get a hold of a sitter off Kohli.

However, once the two were back in the dressing room, India’s middle-order was up to the task to finish the chase.

Shreyas Iyer first joined forces with Shivam Dube and then with Manish Pandey to score the remainder of the 80 runs with an over to spare.

How many of u became fans of his batting today… I think i was first one in that list.. #ShreyasIyer pic.twitter.com/buIJise89A

Excellent chase India! KL Rahul and Virat Kohli scored well but Shreyas Iyer was excellent with his hitting and choices of shot. A chase of over 200 in 19 overs deserves a lot of credit.

This is the first-ever match in the history of T20I cricket where five different players scored 50+ runs. #NZvIND

Shreyas Iyer stars with a 29-ball 58* as ?? chase 204 with an over to spare ?#OneFamily #CricketMeriJaan #NZvIND @BCCI pic.twitter.com/maqQm8RRZ8

Shreyas Iyer's knock is a good example of how having a proper number four batsman (and giving him exposure in that situation) helps. #NZvInd

KreedOn Network
We are a team of sports writers who research about sports in India day in day out. Please reach out to us in case of any specific requirement of digital services on [email protected] .
Previous articleFCG vs KBFC Dream11 Prediction 2020 | FC Goa vs Kerala Blasters FC
Next articleNZ vs IND 2nd T20I Dream11 Prediction | India tour of New Zealand 2020

Delhi Capitals Team: All You Need To Know About The Daredevils...